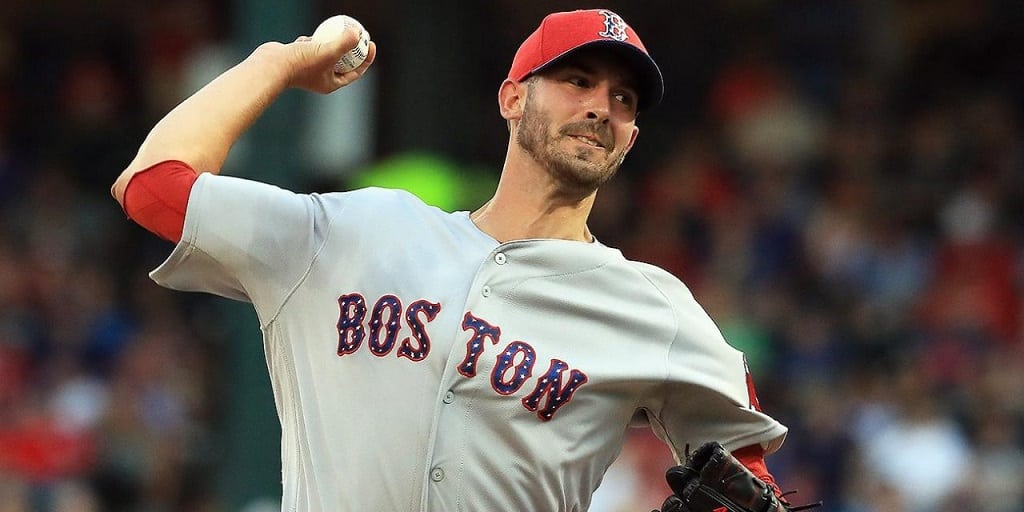 He joined the Detroit Tigers in 2007, and made his debut for the team in 2009, making him the youngest player at the time in the American League. He joined the Red Sox ahead of the 2015 season where he improved his play, effectively earning himself the AL Cy Young Award and AL Comeback Player of the Year Award in 2016.

Porcello was born and raised Frederick Alfred Porcello III in Morristown, New Jersey, on December 27, 1988. He had a special time in terms of his baseball endeavors at Seton Hall Preparatory School, New Jersey. In his final year of high school, he compiled a 10-0 record, garnering 103 strikeouts and an earned run average of 1.44 from 63 pitched innings.

Upon graduation, Porcello was ranked No.1 among high school prospects to enter the MLB draft. Deciding against college education, he was drafted by the Detroit Tigers in the 2007 Major League Baseball Draft. Rick’s $7.28 million four-year deal made him the highest-paid high schooler in the history of the sports.

Porcello spent his first season at the minor league side Lakeland Flying Tigers. He had an impressive turnout and ended the season with an 8-6 record (in 125 innings), the lowest ERA (2.66) in the FSL, and a special seven-inning combined no-hitter against the St. Lucie Mets.

He made his debut for the Tigers in April 2009 in a game against the Toronto Blue Jays. He earned his first professional career win when he struck out three times in a total of seven innings with no walks, allowing one run. The game ended in an 8-2 victory over the Seattle Mariners on April 19, 2009. His improved contribution the following month made him the youngest pitcher since 1985 to win five consecutive pitches.

The Tigers had a record of 86-76 at the end of the regular season while Porcello’s 2009 ended with a 14-9 record and an ERA of 3.96. He finished second-runner up for the American Rookie of the Year Award.

Rick’s poor start to the 2010 campaign saw him optioned to the Toledo Mud Hens for a month. He posted better results on his return to the Tigers on July 17, 2010, to face the Indians, going eight innings, with one run, six strikeouts, and no walks.

Signing another one-year deal with the team in January 2013, Porcello secured the No.5 starter job for the team. He also more or less sold his No.48 jersey number to teammate Torii Hunter and donated the proceeds to the victims of Hurricane Sandy. In the same season, he recorded his first career complete game in what was his 147th major league start, striking out an impressive 14 consecutive batters in the process.

Rick Porcello, in his last season for Detroit, signed another one-year deal worth $8.5 million. In the season, he pitched three complete-game shutouts (two of them coming consecutively), becoming the first player in the history of the Tigers to achieve consecutive shutouts and the first since 2002 to record at least three shutouts in a single season. He ended the 2013 season with more than 200 innings for the first time in his career.

After a relatively poor 2015, he rebounded in 2016 by winning the Cy Young Award, the first MLB pitcher to reach 20 wins for the season. He also led the league in wins and posted career-high stats in strikeouts, innings pitched, ERA, and WHIP. He was also named the AL’s Outstanding Pitcher at the end of the campaign, making him the fourth pitcher for the Red Sox to win the award.

The Red Sox pitcher is a product of a baseballing legacy. His maternal grandfather is Sam Dente. He played Major League Baseball as a shortstop between 1947 and 1955. He played for five teams including the Boston Red Sox. Rick’s older brother, Zach is a baseball coach for the pitchers of Seton Hall University’s baseball team. Porcello’s younger brother Jake, graduated from the same high school as Rick – Seton Hall Preparatory – in 2009 but opted to have a college education at Seton Hall University but was drafted by the Detroit Tigers in the same year.

Due to a comment Rick Porcello made in an interview with NESN, he was rumored to be dating on-air personality, Amanda Soucy. Soucy is a host and presenter for NESN Dirty Water TV, Bruins Daily Video, and the Draft Kings TV. However, the two are said to have split about 3 years into the relationship.