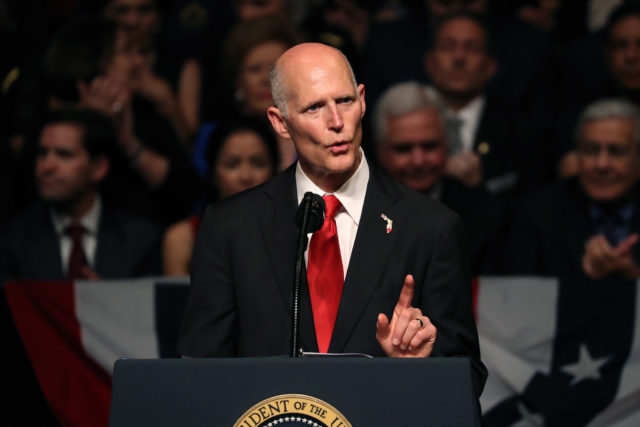 Being one of the successful American businessmen, Rick Scott has been able to get into a position of power after somewhat conquering the business landscape. The Republican Party member served in the United States Navy and spent two terms as the 45th Governor of Florida before successfully running to become the United States Senator-elect from Florida.

On the 1st of December 1952, in Bloomington, Illinois, Rick Scott was born as Richard Lynn Myers to his parents; Esther and Gordon William Myers. For the first two years of his life, Scott lived with his mother following his parents’ divorce when he was an infant. In 1954, however, the two-year-old gained a father after his mother had a second go at marriage and married Orba George Scott Jr. who adopted him. Scott soon adopted his stepfather’s surname as the family made North Kansas City, Missouri, their home.

Scott attended North Kansas City High School where he graduated from in 1970. He then attended community college for one year before enlisting for the United States Navy. He worked as a radar technician for 29 months before returning back to school. This time, he enrolled at the University of Missouri and was able to bag a degree in Business Administration.

Scott made his first foray into business at around this time, buying and reviving a doughnut shop, as he studied for a Juris Doctor degree at Southern Methodist University.

After graduating from law school, Rick Scott worked as an attorney in the state of Texas. During this time, he also grew his businesses by adding a hospital chain, the Columbia Hospital Corporation to his portfolio in the early 80s. Scott served as chairman and CEO to what grew to become the world’s largest healthcare company in the early 90s, however, his reign at the top got to an abrupt end when he was forced to resign his position following an FBI, IRS, and Department of Health and Human Services investigation for fraud.

Scott’s next foray was venture capitalism. He set up the Richard L. Scott Investments which had stakes in health, manufacturing, and tech. Some of the companies in which Scott had a hand in at this time include CyberGuard, Budd Plastics, Alijor.com, Drives, America’s Health Network, Solantic, and Pharmaca, among others. The company was first set up in Stamford, Connecticut, but later moved to Naples, Florida – the state where he went on to kick off his political career.

In 2010, Rick Scott personally funded his campaign for Governor of Florida under the Republican Party and won. He got re-elected four years later in 2014 and then in 2018, went on to successfully run for a seat in the United States Senate, representing Florida.

Rick Scott, along with some of his colleagues like Bill Haslam, Mark Dayton, Jim Justice, and Bruce Rauner, are in an exclusive list of United States Governors who are multi-millionaires and billionaires. The two-time Governor of Florida turned Senator has a net worth estimated to be around $255 million.

Scott made most of his money from the many businesses he has owned over the years. During his tenure as governor, he created a blind trust for his holdings which was looked after by one of his business associates, in order to avoid a conflict of interest. However, in 2018, a New York Times’ report suggested that Scott’s blind trust was only blind in name as he was very much aware of his business dealings, some of which were supposedly favored by his administration’s policies.

Rick Scott is married to his high school sweetheart, Frances Annette Holland. Frances, who is almost one year older than her husband, having been born on the 11th of February, 1952, in Alabama, exchanged vows with Scott on the 20th of April, 1972.

They have been together ever since and their union has been blessed with two daughters (Jordan and Allison) and four grandchildren – Eli, Sebastian, Quinton, and Auguste.

Scott has involved his family members in his business exploits. He and his wife hold several stocks in a number of companies while he and his daughter Allison co-founded one of his former ventures, Alijor.com. You guessed right, the name came from the first three letters of his two daughters.